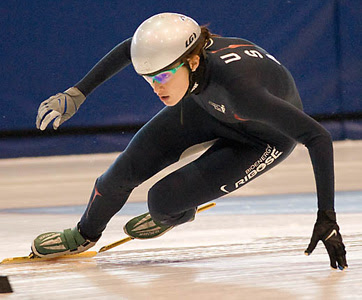 How do Olympic athletes train their minds for the challenges of such intense competition? Turns out, they work with a "mental coach."

...Miller helped Reutter relieve the pressure of Olympic competition by focusing on something that already defines her success. For Reutter, that event actually occurred off the ice, on a mountain slope outside Vancouver, where Reutter and her teammates struggled with an endurance exercise.

The men on the team had to climb the steep slope twice. Reutter was the only woman to join them on a second attempt. She started five minutes behind the men but beat two of them to the finish.

"I will be proud of that moment for my whole life," Reutter says. "And I never would have known what a huge accomplishment it was if Nicole hadn't forced me to realize it."

"I know that even if I didn't win, I put in enough work that I could've won," Reutter says. "I will always be proud that even when it looks like I can't, even when I feel like I can't, I'm always willing to push a little harder just to see if maybe I can."

I can teach you how to identify a past success - a zone moment - and use it as a trigger each time before getting up to speak.

Over time, you will begin to asssociate speaking with that feeling of success and self-actualization.

From the Green Room: Speaking anxiety often stems from negative triggers, such as thinking about a past speaking or performance experience that didn't go so well. The Green Room Trigger helps you break that negative thought pattern and focuses you, instead, on your best self.
Posted by Sarah Gershman at 8:20 PM

The skater's trigger -- recalling the accomplishment of a highly demanding training exercise -- was directly related to her upcoming Olympic performance. Do you think that the trigger might have been less effective if it had been something unrelated to skating such as success in a piano recital or on math test? In other words, I'm wondering to what extent the best trigger for reducing the stress of public speaking would be a previously well-executed presentation.

Great question. The article deliberately pointed out that this was an experience that took place "off the ice." I think the trigger does not have to have anything directly to do with speaking itself. I once had a client who chose the experience of being at the top of a high mountain. Thinking about the perspective she gained and the feeling of confidence greatly helped her in speaking situations.

Sarah Gershman
Sarah Gershman is president of Green Room Speakers, a presentation skills training company based in Washington, DC. Sarah teaches people how to craft and deliver knockout presentations. Recent clients include Microsoft, the Office of the Secretary of Defense, the U.S. Department of Treasury Executive Institute, the International Republican Institute, the National Democratic Institute, InsideNGO, Perseus LLC, Dechert LLP, HOK, the National Council on Teacher Quality, the Embassy of Canada, So Others Might Eat (SOME), UJA Federation of New York, the Overseas Private Investment Corporation, the Red Cross, AVODAH: The Jewish Service Corps, the Society for Mechanical Engineers, the Kauffman Foundation, DMB Pictures, the Kauffman Foundation, the St. Louis Jewish Federation, and the US Department of Justice. Sarah combines more than 15 years of classroom teaching experience with a strong background in theater. Sarah is a Wexner Graduate Alumni Fellow and has a Masters in Social Work from Columbia University and a Masters in Judaic Studies from the Jewish Theological Seminary.