Conan O'Brien and The Power of Unexpected Emotion


The content was clearly very moving. And his delivery was both clear and powerful.

But what really made us sit up and listen was the shock of seeing someone who always cracks jokes suddenly and unexpectedly speaks with full sincerity.

From the Green Room: The next time you speak, take a moment to drop your usual persona and try something radically different. If you're normally loud - get quiet. If you are very serious - act goofy. And if you are always the comedian, take a moment to speak personally and sincerely to your listeners.

Your audience will remember that moment not only because it's so unexpected, but because you had the courage to reveal another side of yourself.
Posted by Sarah Gershman at 9:25 PM 3 comments:

Meet Your Audience Where They Are

The Folsom Prison scene from Walk the Line is so fantastic, I had to use it again.

The prison warden cautions Johnny Cash (Joaquin Pheonix) not to sing a song that reminds the prisoners they are in prison. Cash looks up and says, "You think they forgot?" He then walks out on stage, thanks the men for being "the best audience we've ever had" and sings Cocaine Blues:

How do the men react? They love it.

The scene has a decidedly redemptive quality to it. Out of respect for their current state, Cash chooses to sing a song about a criminal going to jail. And this is actually what enables the audience to transcend their current state and sing and cheer joyfully along with him.

From the Green Room: Whether you have bad news to give or you're speaking to an audience who's going through a rough time, don't hide from it. Go there with your audience. This kind of sincere honesty is both respectful and redemptive.
Posted by Sarah Gershman at 9:23 AM 2 comments:

Labels: connect, honesty, johnny cash, meet the audience where they are

Joaquin Phoenix Shows Us How to Use Prop

Using a prop, if it's done well, can be a powerful tool to make your message stick.

For a great example of this, watch the Folsom prison scene from the movie, Walk the Line:

From the Green Room: Try using a prop - and one prop only - to visualize and concretize your message. If you do it right, it could be the most memorable and powerful moment of your presentation.
Posted by Sarah Gershman at 11:01 PM 2 comments: 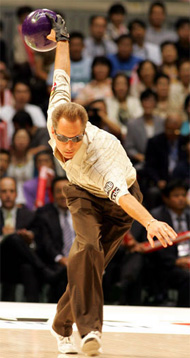 The goal of the bowler and the speaker is not to throw the ball straight down the middle towards the head pin, but instead to hit the space between the head pin and the pin right next to it.

This is called "hitting the pocket."

One way to do this is to bowl "straight." This requires precise aim every time.

Many bowlers say that the only way to score high consistently is by throwing a hook.

A hook is a ball that rolls in a curving pattern, thus hitting the pins with more force and requiring less precision.

Most of the time, bowlers first learn how to master the straight throw before they learn the hook.

As a beginning speaker, it can be tempting to experiment by throwing the audience a curve ball - taking them in a direction they don't expect at the start.

While I am all for creativity and risk taking, I follow the wisdom of the bowler.

Before you try to master the curve approach, first get your "straight throw" presentation down cold. No fancy footwork or great surprises. Just meaningful content and a powerful delivery.

Once you have that down, you can begin to learn how to throw a hook.
Posted by Sarah Gershman at 9:47 PM 2 comments:

Last night, I went bowling with some friends.

During the third frame, I threw the bowl straight down the middle - like an arrow pointed towards the center of the dart board.

To my dismay, I only knocked down seven pins. To make matters worse, the three pins left were on opposite sides of the alley. What's a bowler to do?

Turns out, the middle pin or head pin is not the one you want to hit if you hope to knock 'em all down.

A few frames later, I hit the pocket, that space right between the head pin and either pin next to it. Strike!

Often when we get up to speak, we try to hit that middle pin. We make our point so clearly and so directly, that we leave no space for the audience to absorb it. When you deliver the "straight down the middle" speech, many people may your understand message, but you will never truly wow the audience - you will never bowl a strike.

A really great speaker has the ability to deliver a message with force and precision - while deliberately leaving space for the audience to have that moment of self-discovery and transformation.

From the Green Room: When you get up to speak, aim for the pocket. Aim not just to get your point across, but to communicate in such a way to enables your listeners to discover your message for themselves.
Posted by Sarah Gershman at 9:34 PM 1 comment:

Someone who read my last post on the Karate Kid asked me, "How can I ever hope to prepare like Danny LaRusso? I don't have time to practice repetitive motions all day!"

Mr. Miyagi would be proud.

From the Green Room: Each day provides us with dozens of opportunities to practice using our voices. The more you work at strengthening your voice in casual conversation, the better you will sound when you get up to give a speech.
Posted by Sarah Gershman at 9:21 PM 3 comments:

Wax On, Wax Off Public Speaking 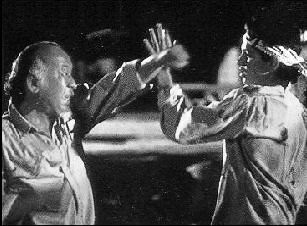 One of my favorite scenes in the movie was when Mr. Miyagi teaches Daniel LaRusso karate by having him do a series of seemingly endless chores. For each chore, he instructs to Daniel to use a specific arm motion over and over again.

Frustrated, Daniel wonders when he will ever learn "real Karate?"


Just as he is about to throw in the towel, Mr. Miyagi demonstrates that the very motions he used to sand the floor, wax the cars, and paint the fence were exactly the motions Daniel needed to effectively block any punch. Those hours and hours he had spent practicing and mastering those simple motions paid off in spades.

One of the lessons we can learn here is about the importance of preparation.

People often ask me, "How can I learn to speak on the spot?" There are no magic tricks to mastering this skill.

If you know your stuff, keep up on your reading, and walk into meetings assuming that you could be asked to speak, you will do just fine.

From the Green Room: Being prepared means knowing your area of expertise well enough so that you are able to speak comfortably about it at any time. Each time you enter a situation where you could be asked to say something, assume you will be and prepare accordingly. Keep doing it. Over time, this will get easier and easier.

Can't wait to see the remake this year...

Sarah Gershman
Sarah Gershman is president of Green Room Speakers, a presentation skills training company based in Washington, DC. Sarah teaches people how to craft and deliver knockout presentations. Recent clients include Microsoft, the Office of the Secretary of Defense, the U.S. Department of Treasury Executive Institute, the International Republican Institute, the National Democratic Institute, InsideNGO, Perseus LLC, Dechert LLP, HOK, the National Council on Teacher Quality, the Embassy of Canada, So Others Might Eat (SOME), UJA Federation of New York, the Overseas Private Investment Corporation, the Red Cross, AVODAH: The Jewish Service Corps, the Society for Mechanical Engineers, the Kauffman Foundation, DMB Pictures, the Kauffman Foundation, the St. Louis Jewish Federation, and the US Department of Justice. Sarah combines more than 15 years of classroom teaching experience with a strong background in theater. Sarah is a Wexner Graduate Alumni Fellow and has a Masters in Social Work from Columbia University and a Masters in Judaic Studies from the Jewish Theological Seminary.